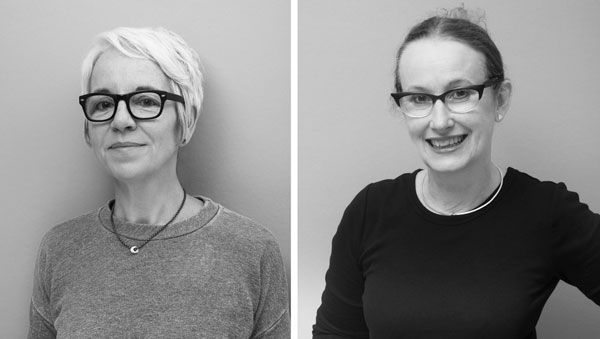 
Today Latham & Neve is working towards a more sustainable way of working, made easier since moving out of London in the 2000s and returning to their roots in the Garden of England. They use recycled silver and gold and most of the work is handmade from scratch, but even the casting is done locally and everything is finished and sent out from the studios here in Kent.

Feel free to browse our collections or if you are looking for something in particular try the jewellery section.

Medway College of Art & Design, now part of the University of the Creative Arts, was where Anna Latham and Helen Neve met in their early twenties having both returned to education. Anna's interest in jewellery had been sparked off by her time as an au pair in Germany, where the family she worked for took her to visit their jeweller. The chunky rings of copper and gold, set sometimes with just one big diamond, often left unpolished, were quite different to anything she’d seen before and made a huge impression. Meanwhile Helen was in London, taking an evening course in jewellery making at the City Lit while working in a graphics studio during the day. She often visited the Contemporary Applied Arts Gallery nearby and still treasures her Jewellery Concepts and Technology book which her colleagues gave her as a leaving present.

They both relished their four years of study in one of Britain’s leading jewellery and silversmithing colleges, learning techniques and craft first hand from seasoned practitioners and internationally regarded teachers, gathering work experience and making contacts in the business. After graduating they both worked in the industry for a few years, and in 1997 decided to join forces. Latham & Neve was born! Starting with collections of cast silver, they soon moved on to produce the hand made pieces which form the majority of their work now, although it must be said, some of the early cast pieces remain popular and continue to be collected.

Latham & Neve quickly established itself in the field of contemporary jewellery design and by the end of the nineties was stocking shops and galleries throughout the UK and abroad. That they have sustained the business for more than twenty years, through all the ups and downs of the world economy and just life itself, is a tribute to their resilience and self-belief. Their solid, Modernist design values, attention to detail and no nonsense approach to the function and performance of their simple, elegant work has kept them in the forefront of British jewellery.